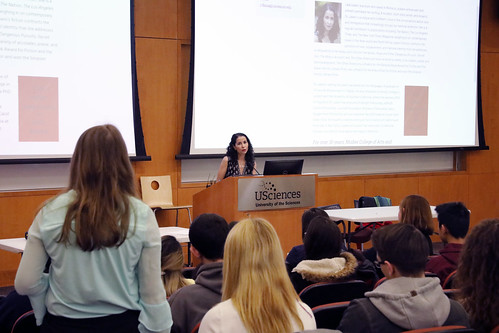 At the Misher Festival of Fine Arts, Laila Lalami, PhD, the 2020 Misher Visiting Professor of Humanities and Honors Colloquium Speaker, spoke about how her experience growing up in Morocco and then immigrating to the United States and earning citizenship has impacted her writing style.

Dr. Lalami began reading at an early age, however, although her family spoke Moroccan Arabic, the books she read were in French, a vestige of the country’s history as a French colony.

“I learned to empathize with french characters, but I never saw myself in these characters,” she said, during the lecture on January 30 on campus. When she began writing at age 9, she wanted to tell her own story but found that difficult to do when writing in French. “English felt like a novelty.”

She began to write her own characters and became focused on people who have been displaced and identify as immigrants, outcasts, and outsiders.

“In writing about other people I never forgot what it was like not seeing myself through the writing of others who wrote about Morocco,” said Dr. Lalami. “I strive to write with the same sensitivity for my characters because I am empathetic to each of them.”

Dr. Lalami spoke about her award-winning novels, including The Moor’s Account, Secret Son, and Hope and Other Dangerous Pursuits, but spent most of the time talking about her latest The Other Americans and her forthcoming novel Conditional Citizens. In addition to writing about it in her novels, Dr. Lalami is outspoken on issues about race and immigration, addressing questions about displacement and national identity in her work.

“Fiction is so important because it gives you access to all perspectives,” said Dr. Lalami. “He or she who tells the story controls the narrative, controls the world.”

She encouraged student writers to stay true to their vision and tell their story from their perspective, even when they face doubt or criticism from others who don’t understand.

“Stick with what you want to say,” she said.