Please ignore this javascript. This is for analytics tracking. USciences Students, Community Come Together to Help Paint Mural | University of the Sciences | Philadelphia, PA

With Mural Arts Philadelphia, USciences hosted a community paint day as part of welcome weekend for new students and members of the surrounding community to join together to help paint a mural that will go up on the Living & Learning Commons building.

The building, which was completed last winter, is located at 46th Street and Woodland Avenue on the site of the former Alexander Wilson School. The University purchased the land from the School District of Philadelphia years after the school was shuttered.

The school building had been adorned with many vibrant murals, so in order to honor the importance of the school to the community, USciences has worked to include parts of the murals in the new construction. One mural can be seen in the window coverings on the 46th Street side of the building.

Another, known as “Doorway to Achievement” was updated by artist Jon Laidacker and will be added to the building near the intersection of 46th Street and Saybrook Avenue, near its original location. The mural was originally created 12 years ago when Laidacker worked with 20 4th, 5th and 6th graders for 10 weeks to develop the idea.

“The updated version continues that same idea, that same theme, just with an updated feel,” he said. 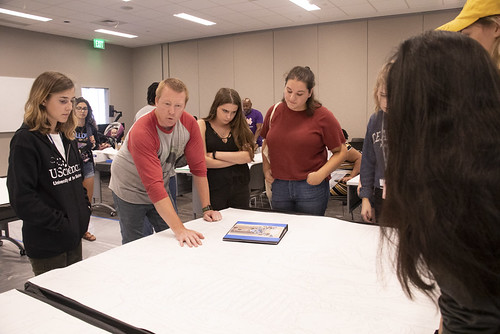 To update the mural, Laidacker has included some USciences students and the community, as well as Wilson School students.

“There were some beautiful murals that were painted on the walls and we thought it was important for a community and neighborhood continuity aspect to actually recreate some of those murals,” said David Forde, USciences Vice President for Community and Government Affairs. “It was great to see our students and neighbors come together and paint the mural that will go on the side of the building and a way for our students to meet some of their new neighbors.”

First-year students living in the LLC volunteered their time to help paint the pieces of fabric that will be used to create the mural. Laidacker outlined the sections of the mural making an intricate paint-by-numbers project. Students and community members grabbed paintbrushes and donned aprons to get to work.