With pomp and circumstance, USciences faculty, staff, students, alumni, and friends marked 198 years since the University was established at a special Founders’ Day ceremony on Feb. 14, 2019.

Sandra Mesics, director of St. Luke’s School of Nursing and transgender advocate, was recognized with a honorary doctor of science degree during the ceremony. Borna Novak BC’19, Boyenoh Gaye PhD’19 (pharmaceutics), Zachary Klase PhD, and Bernadette “Bunny” Kelly were also honored with awards of merit.

The annual event recalls when on Feb. 23, 1821 68 prominent Philadelphia apothecaries met in Carpenters’ Hall to establish the basis for the improved scientific standards to train more competent apprentices and students. Their pledge “to invite a spirit of pharmaceutical investigation" led to the organization and incorporation the Philadelphia College of Pharmacy (PCP)—the first college of pharmacy in North America a year later.

PCP is now now a part of University of the Sciences. The group ushered in a new era of the practice of pharmacy—the identification, selection, compounding, and analysis of drugs—and laid the foundation for a legacy of future advances and discoveries. 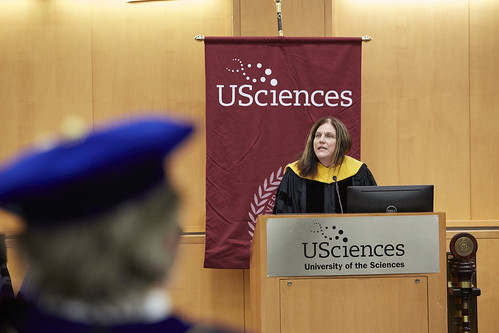 Mesics embodies those traditions through her work both in nursing education leading the St. Luke’s School of Nursing, the longest continually operating school of nursing in the country, but also through her leadership in the transgender community. Mesics, who was assigned male at birth, made a medical transition in the 1970s and became active in the Transsexual Action Organization and is recognized by linguists as one of the first individuals to use the term “transgender,” which appeared in a 1975 article she wrote for Image Magazine, a publication serving the trans population for which Mesics served as executive editor.

In her speech, Mesics encouraged students and future healthcare professionals, as well as their faculty, to connect with their patients on a human level. “You can step from behind the computer screen to experience compassion with and for our patients,” she said.

Mesics spoke about the struggles facing transgender individuals today, reporting that 28 percent of transgender individuals were subject to high rates of poverty, homelessness, substance abuse, physical or sexual violence, discrimination, and bullying. “I believe so strongly in the power of caring and compassion because I know what a lifesaver they were for me,” she said.

“As teachers, administrators, staff members, and role models, we have the unique ability to not only teach the scientific method and to teach evidence-based practice, but we have the responsibility to model caring and compassion in every encounter, every day, with everyone we interact with,” Mesics said. “We have the duty to roll back this tide of hatred.”

Acknowledging the spirit of our founders in our own faculty, staff, and students, the University presented awards of merit to those amongst our ranks who embody this spirit, too.

Dr. Klase, assistant professor of biological sciences, was chosen as the 13th recipient of the faculty award of merit. Nominated by the faculty, staff, and students of the Department of Biological Sciences, Dr. Klase has cultivated a highly successful research program and been an outstanding teacher for both undergraduate and graduate students.

Novak, who in addition to his academic success is captain of the USciences’ men’s tennis team, was awarded the undergraduate student award of merit, for his leadership in the classroom, on the court, and in the research lab. Novak, who will be graduating in May, will be heading to Washington University in St. Louis to join the prestigious MD/PhD program.

Gaye has excelled in laboratory skills during her time as a PhD student at the University,  earning her recognition as the recipient of the graduate student award of merit. She has had four research articles published and presented at six professional meetings, while also obtaining a provisional patent pending for one of her discoveries.

Kelly, student academic specialist in Philadelphia College of Pharmacy, was awarded the fourth annual staff award of merit for her notable impact on students and the student experience. She was noted for making a lasting impact on students, including the impact she has on a student who graduated in 2005 with whom she was recently asked to join on a medical mission trip to Kenya.