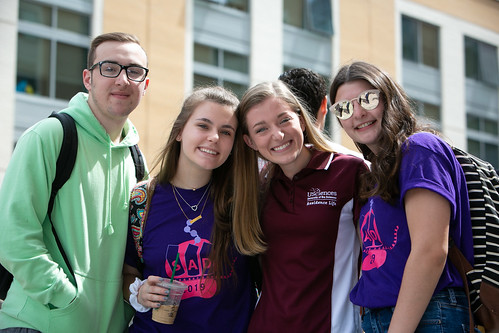 Hundreds gathered in the terraced courtyard of the Living & Learning Commons to celebrate the completion of the new residence hall located at 46th and Woodland Avenues on Friday, April 12, 2019.

The campus community and neighbors gathered for a celebration complete with live music and tours of the student rooms and amenities typically accessible to only building residents.

The Living & Learning Commons sits on the site of the former Alexander Wilson Elementary School, which had been closed when USciences took ownership of the site from the School District of Philadelphia in July 2015. The University engaged the surrounding community to ensure opportunities for feedback during the project.

“Community feedback showed a desire to retain a large mural created by the Mural Arts Program on the former Alexander Wilson Elementary School; therefore, we will be hosting community paint days where residents and students can come together to help paint the building’s mural that will reflect the mural that was on the former Wilson School,” said Dr. Katz. “We hope this project will spearhead even greater collaboration between the campus and our friends in West Shore.”

The Commons includes amenities such as double occupancy rooms with private bathrooms, smart laundry facilities on each floor, student lounge and study spaces, multi-use classrooms, and two retail spaces. One of the retail locations will house an ATI Physical Therapy clinic which will be open to the public. The second retail tenant has yet to be announced.

“[The building] really is a ‘Common’ space that is built to bring the community together.,” said Suter. “It's a space in which students can collaborate and grow as hard-working professionals, while still allowing them the privacy and comfort that allows them to grow as individuals.”

To mark the occasion the students helped to assemble a time capsule to be installed on the site. The capsule will include photos of the resident advisors and building staff as well as a key from Goodman Hall, the residence hall where students previously lived, a program for the day, as well as t-shirts from student events including Student Appreciation Day, which fell on the same day as the celebration. Also included were items from the dedication of the former Alexander Wilson School, which were discovered in the time capsule recovered from the building before it was demolished. 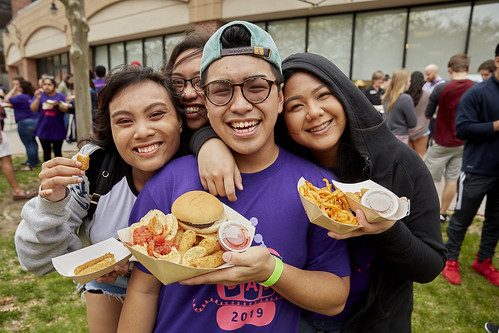