A team of students from three Chester County-area high schools is preparing to represent the United States in an international physics competition in Poland after winning the national title at USciences in April.

The students went head-to-head with another team from Huron High School in Michigan on April 14, 2019, at the U.S. International Young Physicists’ Tournament and were crowned the national winners.

Throughout the day-long event, the teams were tested on their physics knowledge in ways that judged their application of the science.

“Developing their own experimental design to solve problems, overcoming the obstacles, being able to defend their results, using creativity, imagination, and the laws of physics to try to understand what is going on is an irreplaceable experience,” said Elia Eschenazi PhD, chair of the Department of Mathematics, Physics, and Statistics.

Dr. Eschenazi says the IYPT takes a different approach by focusing on open-ended physics problems so the students can fully understand the issue at hand.

Throughout the year, the students are given research-oriented problems and are tasked with finding a solution. At the tournament, the teams present and discuss their solutions with the other teams in front of a jury made of local and international physicists.

“The iconic Physics Fight consists of three stages where teams perform in three different roles,” said Dr. Eschenazi. “First, the Reporter gives a presentation about their solution that lasts just 12 minutes. Second, the Opponent challenges and criticizes the proposed solution in scientific discussion with the Reporter. Third, the Reviewer gives their judgment of the report and discussion. The three teams then get questioned and graded by a Jury that consists of team leaders and invited scientists.” 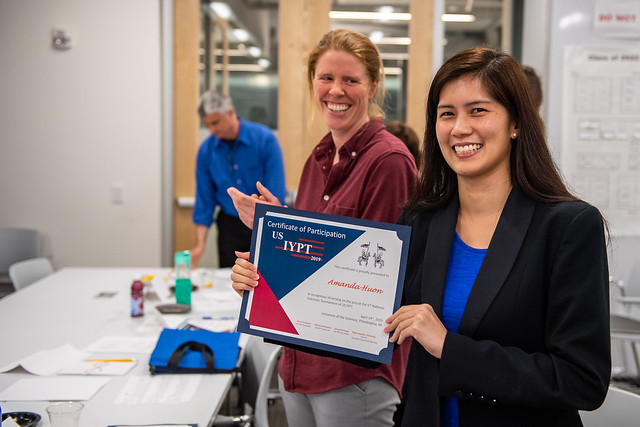 The teams are required to rotate so they are judged on their performance in all three roles. Dr. Eschenazi says this practice is meant to mirror the process of real scientific discussion to help supplement their exam-based curriculum.

Following the victory of the Chester County students, Dr. Eschenazi and other physics faculty will help prepare the team as they represent the United States from July 6 through 1.

“An important benefit for the University is that USciences expands its reputation in high schools being on the front line of new educational paradigms for research at this level,” he said. “Furthermore, the collaboration of USciences with high schools enhances our ability to promote not only STEM education in general but create the opportunity of a continuous interaction between university faculty and high school physics teachers.”

Each year, the international competition moves to a different location and the 2019 IYPT will be held in Warsaw, Poland. The United States team is one of 38 countries represented at this year’s tournament; each team will present solutions to five or six problems at the competition.