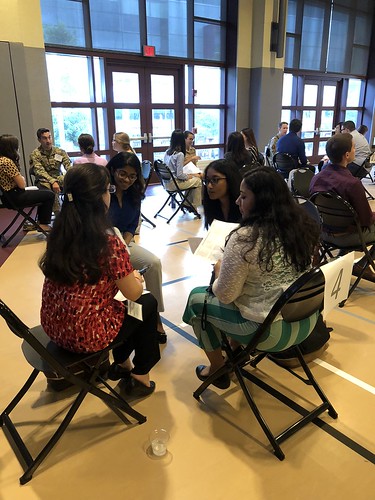 Students entering their first professional year (P1) of the Doctor of Pharmacy program at Philadelphia College of Pharmacy had a chance to speed network with professionals working in the field on Tuesday, August 20, 2019, gaining career advice from eight pharmacists in just two hours.

Philadelphia College of Pharmacy and the Office of Institutional Advancement hosted the event bringing together alumni, friends, faculty, and current students in the Athletic/Recreation Center. Approximately 40 pharmacists attended the event, meeting with dozens of students in small groups.

“The P1 students rotated between eight pharmacists over this two-hour ‘speed networking-like’ activity,” said Kristin Motley, PharmD, who helped to organize the event.

The pharmacists who attended work for drug manufacturers, hospitals, managed care, research, public health, retail, compounding, and long-term care pharmacies. Pharmacists who work for the government in the armed forces and public health were also represented at the event. The participants came from as far as Maryland, New Hampshire, and Arizona.

"The pharmacists explained their educational background and career pathways in 10 minute micro-sessions with the P1 students,” said Dr. Motley. “The students left the event more excited than ever to pursue their dreams of becoming a pharmacist.”

Students are encouraged to follow up and keep in touch with the pharmacists they met to engage in mentorship and get information about internships and career development opportunities.  The college hopes to offer this event for more P1 classes moving forward.