Malis Lecture Examines Creativity Through the Lens of da Vinci 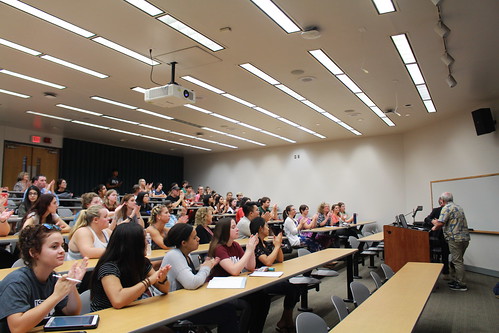 A noted scientist and artist whose work has lived on for more than 500 years, many have looked to Leonardo da Vinci as an example of creativity. During his lecture at The Bernard J. Malis Memorial Lectureship in Humanities on October 2, 2019, at USciences, Salvatore Mangione MD discussed with students, faculty, and staff, the things about da Vinci that may help us to understand why he was so creative and which of those things we can replicate to encourage creativity in ourselves.

“Leonardo was restless and went to live in many cities and traveled often,” said Dr. Mangione. “Build boosters into life, like new experiences, and always bring a notebook to write anything down as it comes to you.”

Dr. Mangione, who often speaks to medical schools about his examination of da Vinci, said in many ways the modern system of education and medical education, in particular, are exclusionary of many of the things that helped to make da Vinci creative. For instance, he says da Vinci was often a procrastinator, he wrote in a mirror image, he was comfortable with ambiguity and grey areas, had a keen sense of humor and was a musician.  Likely he would not have been seen as an ideal student for admission, Dr. Mangione said, challenging the criteria we use to identify good candidates.

Dr. Mangione is a clinician-educator whose interests include physical diagnosis, medical history, community service and the role of humanities in medicine.

Dr. Mangione obtained his MD from the Catholic University of Rome and trained at the Medical College of Pennsylvania. He is an Associate Professor of Medicine and Associate Program Director for the Internal Medicine Residence at Jefferson  Medical College. He is also the creator of the history of medicine lecture series and the Jefferson Medical Cineforum.

In his position, he has advocated for rekindling the field of medicine and helped foster the creation of a creative and artistic side of medical education.

The Bernard J. Malis Memorial Lectureship in Humanities was endowed by Bernard Malis, who graduated from PCPS in 1944 with a BS in pharmacy and in 1947 with an MS in pharmacy. He was a consultant in pharmacology and public health and was chair of the Philadelphia chapter of the Explorers Club. In 1989, Malis was elected a fellow of the Royal Society of Arts.