Hundreds of high school students were welcomed on the USciences campus October 14, 2019, for the 2nd Annual Central High School Day, a university-wide effort to introduce students to fields in health sciences.

More than 340 students were broken into groups of 80 as they attended sessions to learn about 11 different programs offered on campus, from microbiology and psychology to occupational therapy and medical laboratory sciences.

Throughout the day, attendees were able to hear from people who were once in their shoes as young students. Notable Central High School alumni, Marvin Samson HonAlum'96, HonDSc'16 and Pennsylvania representative Jim Roebuck, spoke about finding a career path that works for them.

“Central High School and USciences share many connections,” said Samson. “Both are Philadelphia institutions with a long history and expertise in providing high quality education.”

Other alumni who went on to attend USciences answered questions from students during a panel session that included a breakout rendition of the Central High School song. 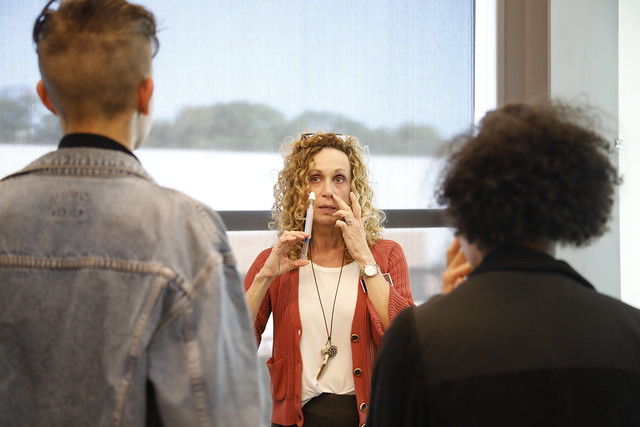 “This was the foundation of the pyramid for me,” said Patel.

During a session about pharmacy education, Central students were taught about the various forms of naloxone available and how to administer each one if they ever encountered a person suffering an opioid overdose. They were also trained on how to provide CPR in case of an emergency.