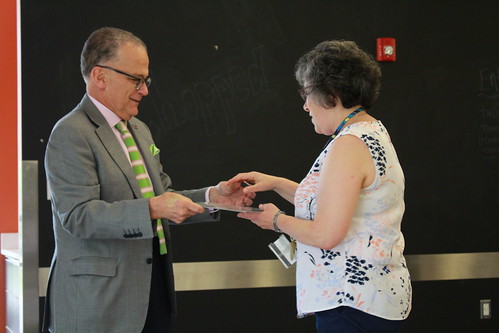 Faculty and staff were honored at the annual Employee Recognition Reception at USciences on June 6, 2019.

Every year, the University comes together after the spring semester is over to celebrate the years of service by employees. Ranging from five to thirty-five years of service, faculty and staff were recognized by President Paul Katz, MD. Two employees were also honored with the President’s Special Achievement Award and the Student Advocacy Award.

The 2018-19 recipient of the Present’s Special Achievement Award was Anne Vaccara, benefits specialist in the human resources department.  The award is given to a member who has demonstrated superior performance on a consistent and sustained basis and whose achievements in the past year have been significant. Vaccara has been with the University for 15 years in a variety of roles.

“Benefits can be complicated and challenging work especially with integration into a new system, but Anne’s steady hand keeps the ship afloat and we do not know what we would do without her,” said the nomination letter. Faculty members also noted Vaccara’s kindness, attention to detail, and timeliness.

The Student Advocacy Award is given to an employee who has made a significant impact on the success and well-being of the students.

“The student experience is created not by one moment or individual, but by the multitude of interactions, lessons, and discoveries a student has while at USciences,” said Ross Radish JD, vice president of student affairs and dean of students.

Elisbetta Fasella, PhD, associate professor of chemistry, was nominated by her first-year students for her support in and out of the classroom.

“I’ve never had a professor who was as invested in each and every one of his or her student’s success as much as her,” read one letter. “Dr. Fasella wants us to succeed so much that it makes you want to too. She has so much passion for what she does, it makes you want to find that specific thing you’re just as passionate about too.”