Please ignore this javascript. This is for analytics tracking. Dig It: Student’s Passion Leads to Month-Long Excavation Trip in Belize | University of the Sciences | Philadelphia, PA

By Colby Gallagher and Nicole Carrera

Victoria Pobok Bio’20, HumSci’20 has always loved learning about ancient cultures and this summer she was able to indulge that curiosity during a month-long archaeological dig in Northern Belize studying the ancient Maya.

The trip will now become part of her research at USciences, as she will complete a capstone course, an optional self-directed study for students interested in specific fields not typically taught at the University. USciences also supported Pobok and her dig partner Andrew Campbell PHB’19, financially, granting her funds from the Center for Undergraduate Research to help afford the experience.

“We both could not be more grateful for the help we received, and it was reassuring to know that even though we seemed to stray from the norm, USciences still had our backs and helped us to succeed,” said Pobok. As a result of this experience, Pobok said has a better idea of her career path and hopes to continue her education, studying biological anthropology.

Pobok found the experience after she pursued summer classes in cultural anthropology at the Community College of Philadelphia in 2018. The instructor, Stan Walling PhD, discussed his experience and findings in archeology with the class and Pobok was so enthralled, she met with him during several after-class meetings to discuss his experience. 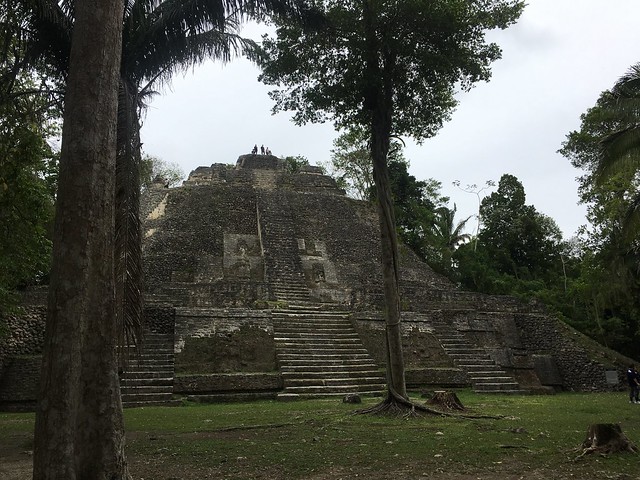 “He soon learned I had more than just a surface interest in his field,” she said. “Then in December 2018, he offered me a spot on his research team. The next thing I knew, I was packing my bags for a month in the jungle!”

During the excursion, Pobok and Campbell lived without modern luxuries; the tents had no air conditioning, cell phone service, or internet.

“In the Belizean jungle, we lived among the trees and the animals in a 1200-year-old unmapped rainforest: a place that can be quite scary if you do not know what you are doing,” Pobok said. “In the jungle we came across tarantulas, vampire bats, venomous caterpillars, and the occasional hostile spider monkey.”

On top of learning how to navigate a different lifestyle, Pobok was also learning how to firsthand participate at excavation sites. She received her own unit and was taught how to identify, handle, and log artifacts.

“Overall, the biggest thing I learned on this trip was that I am more adaptable and capable than I ever gave myself credit for. When we departed, Drew and I were able to identify not only ancient structures, but also lithics (stone tools, which often just look like rocks), ceramics, and other artifacts,” said Pobok. “The most amazing thing we learned from the field school was how to identify and handle ancient artifacts to assist in the better understanding of an entire civilization. How cool is that?”

Leading into the trip, she had a certain idea of what she’d like to study as she continues her academic career, but Pobok realized that hands-on experience is the best way to truly decide your path.

“Surprisingly, I learned that archaeology itself may not be the best field for me; however, I learned that academic research is where I belong. I will use my field school experience to apply for PhD programs for Biological Anthropology in the fall,” she said. “I hope to study humans and uncover more about how modern humans and culture came to be, and how they can possibly be linked to genetics and human biology.”

Pobok said the experience has given her more than just memories. The dig will serve as her undergraduate thesis. Her research developed into a 35-page comparative piece about theriomorphic deities in both Egypt and Belize.

Using her previous knowledge of Ancient Egypt, Pobok “compares the ecological and environmental similarities of both Ancient Egypt and Ancient Central America while also evaluating the form, symbolism, and cultural significance of individual theriomorphic deities that feature animals common to both ecosystems”, and ultimately concludes that “each respective environmental niche offers unique mediations of culture and mythology that are not entirely cultural, but also biological and indicative of an intimate relationship between man and environment.”

Pobok’s hard work earned her academic success in the form of the Martin and Karen Gibbs Prize for the Humanities from the USciences Humanities Department, as well as skills needed to be successful in future endeavors. She plans to use her experience in Belize to demonstrate her skills to future employers.

“For future employers, my experiences are memorable! Instead of simply expressing an interest in archaeology from what I learned in class, I can tell them about how I used what I learned.”

While planned expeditions were cancelled due to the COVID-19 pandemic, Pobok recommends that students take the opportunity if given to them. She shares, “I learned so much so quickly from embarking on this dig, and I recommend archaeological digs to any student that wants to learn valuable transferable skills, challenge themselves, and make lifelong connections. While it is not for the faint of heart, it is a great way to learn and immerse yourself in a new branch of research, and it shows that you are dedicated and passionate.”