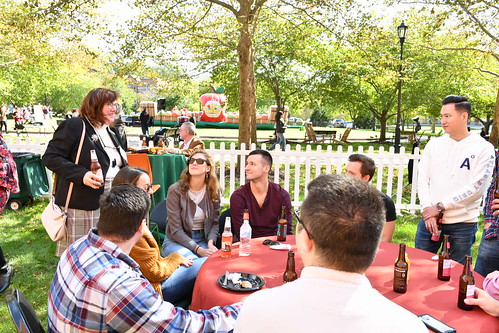 Hundreds of USciences alumni returned to campus on October 12, 2019, to pay a visit to alma mater and celebrate their connection to the University. During the event, several alumni and friends were honored during the annual alumni reception, the Golden Graduate reception, and during the Athletics Hall of Fame induction ceremony.  Additionally, Pi Lambda Phi (PiLam) at USciences celebrated its 50th anniversary with a reception and current students welcomed their families and friends to campus for Fall Fest on the Quad.

During the All-Alumni Celebration on the evening of October 12, several individuals were honored with awards.

The Annual Alumnus Award was given to William Ellis P’85, who has had a long tenure at the helm of the American Pharmacist Association Foundation where he has produced quality research about how pharmacists can improve health care and advance patient care.

The Young Alumnus Award was given to Maj. Andrew Gawlikowski PharmD’10, who has served at the rank of major in the US Air Force and as Chief of the Medical Service Corps, Office of the Director while stationed at Travis Air Force Base in San Diego, CA and Joint Base Mcguire-Dix in New Jersey.  Andrew Peterson PharmD, PhD'09 accepted on behalf of Maj. Gawlikowski.

In honor of her exemplary dedication to the University, Estelle Sherrod, Assistant to the Dean of Philadelphia College of Pharmacy was awarded the Honorary Alumnus Award. Sherrod has been at the university for more than 30 years, 20 years of which she has served in the dean’s office, where she provides executive assistance and coordinates the college’s special events. Additionally, she is an active member of the campus community teaching spin classes and developing relationships with students, faculty, and staff.

Following the ceremony, PiLam celebrated the 50th Anniversary with a celebration in the ARC. Alumni mingled with current students as they joined to celebrate their brotherhood.

Next year’s reunion celebration will be on October 10, 2020.