2019 Misher Festival Dissects the Science of Comedy | University of the Sciences | Philadelphia, PA 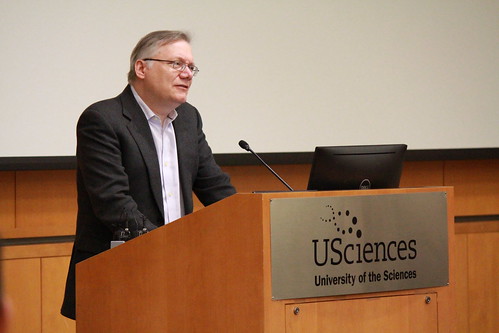 The 2019 Misher Festival of Fine Arts and Humanities brought laughter and comedy to campus with events from Feb. 23 through Feb. 28. culminating with a keynote from Misher Visiting Professor Steve Young.

Young is an Emmy nominated writer who worked with David Letterman on his popular late night shows for much of his career. Young is now the main character in a new comedy music documentary, Bathtubs over Broadway, which premiered at the 2018 Tribeca Film Festival and was a top pick of Robert DeNiro, The New York Times, Variety, and Rolling Stone.

Young brought much of the comedy he covers in Bathtubs over Broadway to USciences as part of his lecture "The Science of Funny: An Hour of Your Life You'll Never Get Back."

Young spoke about how comedians often use mundane, everyday ideas and try to look at them in novel ways to find comedy. He outlined a few classic examples including repetition or focusing on the wrong detail in a situation.

"Comedy is a simple premise that no one else has found before," said Young. "That is the gold standard for creativity."

As a young man, Young recalls when he first saw an episode of the Late Show with David Letterman. One simple sketch sent him laughing, nearly unable to breathe for for 20 minutes. 8 years later he was a comedy writer of the show and giving young comedians the same inspiration.

Young reviewed several bits that he put together for the Late Show over the years, explaining the comedy behind each. He also touched on his more recent interest, industrial musicals. These Broadway-style productions were staged by corporations at sales meetings and convention making sweet music of their latest product.

Young was joined on the schedule for Misher Week by Aali Javid PharmD'11, who also worked with Letterman. Dr. Javid spoke about his evolution from pharmacist to comic sketch writer and helped the audience create their own Top Ten list a la the Late Show.

Other events were peppered with comedians including Mary Radzinski and Darryl Charles as well as academics like Reg Adams, PhD, and Kevin Murphy, PhD.

For over 30 years, Misher College of Arts and Sciences has provided students at USciences with the foundation of their education. The Misher Festival of Fine Arts & Humanities celebrates former University President Allen Misher’s vision of an undergraduate education that embraces history, philosophy, literature and cultural studies alongside biology, chemistry, and more.