Please ignore this javascript. This is for analytics tracking. USciences Celebrates its 197th Founding | University of the Sciences | Philadelphia, PA

University of the Sciences celebrated its 197th Founders’ Day with a special ceremony that awarded an honorary degree as well as awards of merit to a faculty member, graduate and undergraduate students, and a staff member. In addition, the University recognized endowed positions.

Founders' Day at USciences recalls the University's establishment on February 23, 1821, by 68 prominent Philadelphia apothecaries who ushered in a new era in the education and practice of pharmacy. The day celebrates the University’s rich tradition of producing leaders who shaped new dimensions in healthcare, policy and business, and in science and research.

The centerpiece of the celebration was the bestowing of an honorary degree on George M. Wohlreich, MD, MA, president and CEO, Thomas W. Langfitt Chair, The College of Physicians of Philadelphia.

“As the President & CEO of the oldest professional society in the States—The College of Physicians of Philadelphia—I know what it’s like to walk where the ghosts of the founders of “The Birthplace of American Medicine” roam,” Dr. Wohlreich said. “I can certainly imagine what it’s like to roam where the ghosts of some of your most famous graduates dwell. Of course, I’m talking about Sir Henry Wellcome, Silas Burroughs, Josiah K Lilly, Eli Lilly, and Robert McNeil.  One cannot practice medicine anywhere without owing them an inestimable debt. They, and others, were truly the founders of American pharmacy. That is an amazing pedigree for this college and university.”

In addition, the University added Cathy Poon, PharmD, professor of clinical pharmacy and chair of the Department of Pharmacy Practice and Pharmacy Administration, to its roster of endowed chairs and deans. Dr. Poon was named the Barbara H. Korberly Professor in Women's Leadership and Health, a position which provides leadership and devoted resources to the University's efforts to address the challenges that affect women's health policy and access to leadership opportunities within the health sciences. The professorship, established through a generous grant from McNeil Consumer Health and Johnson & Johnson, serves as an enduring tribute to the late Barbara Korberly P'72, PharmD'74, a tireless advocate and powerful mentor of women in pharmacy throughout her career.

As has become part of the tradition of Founders’ Day, Awards of Merit were handed to individuals who exemplify the innovative and entrepreneurial spirit of USciences’ founders.

The Faculty Award of Merit was presented to Bela Peethambaran, PhD, associate professor of biology and co-director of biology graduate studies programs, who has developed a number of research projects focused primarily on engineering plants as a resource for antioxidants and bioactive compounds such as phenolics and flavanols.

Jaspal Brar BI’18 received the Undergraduate Student Award of Merit. He has two published articles including one in the Journal of Medicinal Plan Research and has participated in six presentations at both regional and international conferences. Among recent awards, he won first place for a poster presentation at the American Society of Plant Biologists Conference in December of 2018 and first place for facilitated presentation at the Alpha Chi Symposium in April of 2017.

The Graduate Student Award of Merit was given to Vaishnavi Shah PhD’18. Her pharmaceutics research has led to the development of a novel concept resulting in the filing for a provisional patent application by the University. Dr. Shah completed her PhD work as a part-time student within four years, which is impressive considering similarly situated students take up to a minimum of six years

The Staff Award of Merit was presented to Suzanne Carbonaro, director of assessment for the Philadelphia College of Pharmacy, for her critical role in helping PCP achieve a successful ACPE accreditation report and site visit. 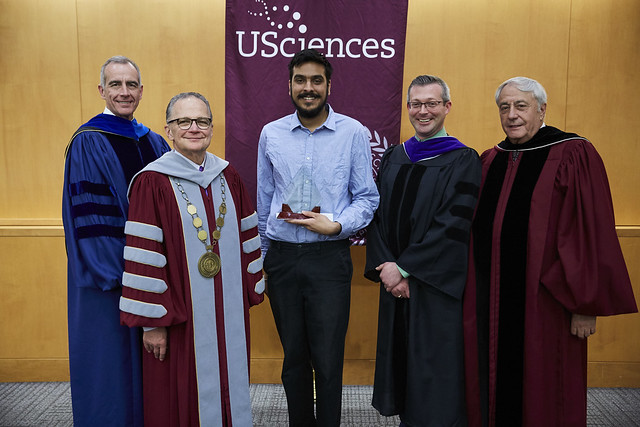