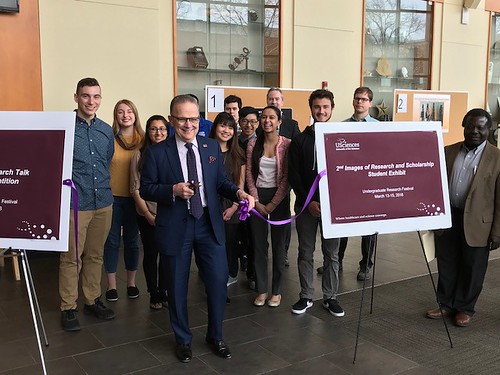 The Undergraduate Research Festival sponsored by the Center for Undergraduate Research (CUR) celebrated the breadth of research projects being conducted by undergraduate students and their faculty mentors in a variety of labs and classrooms across campus. The three-day event formally began with ribbon cutting ceremonies by President Dr. Paul Katz.

From March 13 through 15, the festival hosted “Images of Research and Scholarship,” a visual competition featuring nine stunning images produced by undergraduate researchers on display in the atrium of the McNeil Science and Technology Center. In addition to faculty judges for the images, an online poll was held to determine a “popular choice award” from the CUR Facebook page.

The festival continued with the Undergraduate Research Symposium featuring five oral presentations and 34 research posters, including from students from Ursinus College and Rosemont College. The evening was capped with award ceremonies and a video slideshow displaying the activities of CUR over the last year.

Kent Pham BI'20 “Development of a Selective Media and Methods of Detection for Saccharomyces cerevisiae var. diastaticus in the Brewery”

New Ideas Poster Award:
Magdalena Kalinowska BC'20 and Klaudio Mehmeti BC'19 "Understanding and Removing the Dependence of SAM II RNA on S-Adenosyl Methionine to Form a Triple Helix by Site-Directed Mutagenesis"