University of the Sciences’ Substance Use Disorders Institute (SUDI) recently partnered with local activists and researchers to hold a hybrid community forum, streamed over social media as well as open to in-guest attendees on campus, to address harm reduction initiatives in discussion in Philadelphia to address the opioid epidemic.

In Philadelphia, the opioid epidemic – perhaps more accurately labeled the overdose epidemic with over 1,200 lives lost due to accidental drug poisoning deaths in 2017 – has generated a number of political, scientific, and grassroots initiatives aimed at positively impacting the lives and communities of those affected.

From the Philadelphia Mayor’s Task Force to Combat the Opioid Epidemic, launched in 2016, to the advocacy campaigns of community groups such as SOL Collective and the PA Harm Reduction Coalition, the current crisis has forced the city into action. Underlying each of the initiatives being explored or implemented lies the science behind opioid use disorder, recovery, and ultimately, harm reduction. While harm reduction is not a new concept internationally, many in the Philadelphia region have only recently begun to hear the term.

SUDI, established in 2017 with a commitment to translate science and policy into easily understood and practical recommendations to the general public and policy makers, hosted the 2-hour forum on Thursday, June 7, 2018, with an audience of 80 in-person attendees and over 500 digitally. Forum moderator, incoming USciences doctoral student Robert D. Ashford, asked questions on the CUES ranging from cost and effectiveness, to the impact on local communities and rates of crime, drug use, and litter.

Overall, panelists had high degrees of consensus on the CUE sites, which would offer those with an opioid use disorder a safe place to use opioids and received medical and wrap around recovery supports, suggesting that the science was pretty clear – safe consumption rooms have been shown to reduce death, connect people to higher levels of service, and have an overall positive impact on the local community.

For Philadelphia, many conversations will continue to be had on directions the city will take to address the current crisis. While the science on harm reduction programs, like CUES, suggests their multiple positive benefits, that won’t be enough to establish the first in the city. USciences is committed to continuing the conversations so that no matter what direction we go. 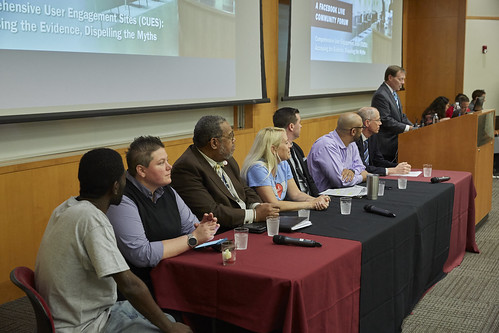