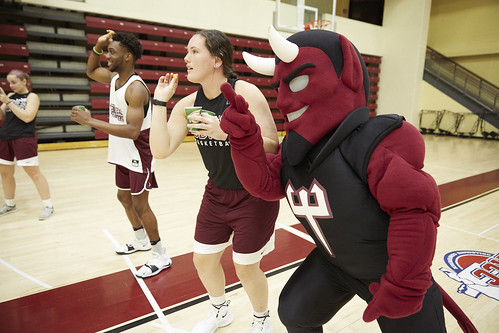 USciences’ men's and women's basketball teams were greeted by crowds of students, including fellow student-athletes, as they were officially introduced at their annual Late Night Madness event on October 18, 2018, at Bobby Morgan Arena inside of the Athletic/Recreation Center.

The pep-rally atmosphere was complete when Drake the Devil, the University’s official mascot who had a recent makeover, was officially introduced to students. Drake posed for photos with students, broke it down with his great dance moves on the court, and cheered on students as they participated in friendly relay races and other activities.

There were also plenty of prizes, giveaways, and free food. The entire event was emceed by Coach Dave Pauley.

Both the men's and women's basketball teams advanced to the Semifinals of the Central Atlantic Collegiate Conference (CACC) Tournament in 2018-19.

Both teams open their 2018-19 campaigns on the weekend of November 9 and 10. The women will host American International on Friday, Nov. 9, at 7 p.m., while the men kick off their season Saturday, Nov. 10, with a 5 p.m. tip at Bridgeport.