Please ignore this javascript. This is for analytics tracking. Dan Hussar P’62, MS’64, PhD’67 Retires After More Than 50 Years at Philadelphia College of Pharmacy | University of the Sciences | Philadelphia, PA

After more than 50 years and thousands of students, Dan Hussar P'62, MS’64, PhD’67 is filing away his lecture notes and retiring.

At a retirement reception for alumni held on campus on Tuesday, June 12, 2018, a line formed out the door to greet Dr. Hussar and thank him for the impact he has had on so many. However, Dr. Hussar said he was just as impacted by the friendship of each in attendance.

“If I were to abstract or provide an executive summary of my comments and my feelings it would be two words: thank you,” he said. “Thank you for the experiences that you have shared with me thank you for what I've learned from each of you. It is a two way street.”

Dr. Hussar has instructed more than 10,000 students and impacted many more through his activities on campus both in and out of the classroom.

“His legacy on this campus is tremendous and almost incomprehensible,” said Provost Peter Miller PhD. “He is a model for faculty, staff and all of us on this campus.”

Many of his former students attended the reception to congratulate Dr. Hussar.

“He has been my advisor for about 13 years now and he is truly an inspiration to so many,” said Paul Caceres PharmD’12, who returned to campus for the reception. “He is still helping me in my career.”

Like so many, Dr. Caceres admires how Dr. Hussar has given back to his profession and has been so involved beyond the classroom or his job for so many years.

“I don’t think there is anyone at this university that would have so many return to campus for them,” said Dr. Patricia Audet, a former student and current colleague of Dr. Hussar.

Although he plans to stay connected with the University, Philadelphia College of Pharmacy, and the students, with whom he has built relationships some spanning decades, Dr. Hussar said he won’t have a shortage of things to keep him busy in his free time.

Dr. Hussar is the author of the Pharmacist Activist, a newsletter and blog featuring editorials and important information about topics important to the pharmacy profession, including information about new drugs. Always interested in the latest treatments, Dr. Hussar has led continuing education programs for practicing pharmacists and other healthcare professionals. His primary interests are in the areas of new drugs, drug interactions, and patient compliance.

In 2017, this dedication to the profession was acknowledged by his peers when Dr. Hussar received the Remington Honor Medal, pharmacy’s highest honor.

“Dan is the conscious of both the profession of and the University,” Dr. Audet said. “It is not just that he was your teacher but the values that he holds. Dan is remarkable for the impact on all of our lives, students, faculty, and colleagues alike.” 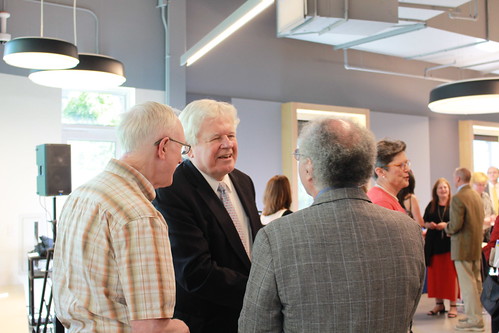