The 11th Annual Femi 3-on-3 Memorial Basketball Tournament was a complete success raising more than $1,500 for the Femi Memorial Scholarship Fund on Saturday, March 18, 2017.

More than 75 alumni, students, and friends of USciences came to play in the tournament to honor the memory and life of Olufemi “Femi” Ogunkorode.

Ogunkorode was in his third year of the doctor of pharmacy program, a star tennis player, and a staff member at the Athletic/Recreation Center when he passed away on March 23, 2006.

“He was and will always be part of the ARC family so every year we pay tribute to his life and passion for basketball by hosting this 3-on-3 basketball tournament,” said Jesse Phillips, director of campus recreation.

A team comprised of USciences men’s basketball players John McGill PhB’17, Brandon Devine PhB’17, and Brian Okolo PH/TX’17 took home the championship trophies. Okolo was also named the tournament MVP, becoming the first ever recipient of the Howard “Howie” Lanier Trophy. Lanier, who passed away last year, was a USciences alumnus who also excelled as a leader of the team on and off the court.

McGill, Devine, and Okolo chose to donate the $300 first place prize back to the scholarship fund.

The fund recognizes Femi’s impact with an annual award given to a student who exemplifies Femi’s characteristics and qualities in life either in the classroom, at the ARC, or in the community. To donate online, choose "Other" as the gift designation and enter Femi Tournament in the comment box.

Upwards of 30 volunteers from USciences students, staff, and administration and contributions from T-House Tees, USciences Student Government Association, Campus Recreation, and the Athletics Department helped to make the event possible.

See more photos from the tournament: 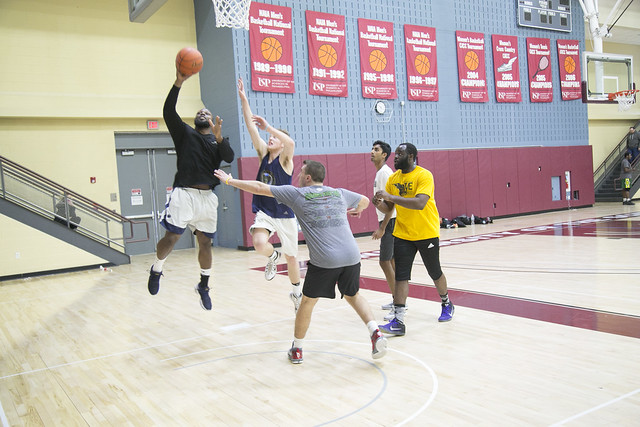