Cars packed to the brim with residence hall room essentials descended on the USciences campus on Friday, August 25, 2017, as the largest class in three years arrives for move-in day.

That day marked the start of the 2017-18 Welcome Week for nearly 350 first-year students who will also take part in the 11th annual convocation ceremony.

Hailing from 16 states, this year’s class of future scientists, researchers, and health practitioners maintained an impressive record of high achievement with an average 3.76 GPA and a 1206 SAT score or 26.6 ACT composite score.

Move-in for residents began at 8:30 a.m. followed by a commuter student check-in at 10 a.m. After settling in to their residence hall rooms, all new students and their families gathered at 1:30 p.m. for a special convocation ceremony that will take place in the Athletic/Recreation Center.

This year, USciences hosted Stephanie Andrewlevich, principal of the nearby S. Weir Mitchell Elementary. Under her leadership, a dedicated team of educators has helped Mitchell undergo a positive transformation in climate and culture. USciences has a special relationship with Mitchell where University students sponsor service projects in support of beautification of its facilities, student-based STEM trips, and math tutoring.

When the ceremony concluded at 3 p.m., it was time for final goodbyes. While students began a jammed-packed weekend of activities (before classes start on Monday, August 28), parents were invited to attend a Student Affairs Parent Connection Program titled “What to Expect During the First Four Weeks.”

Before they know it, all will be together again for Family Fall Fest on Saturday, October 21.

See more pictures from this year's move-in day and convocation: 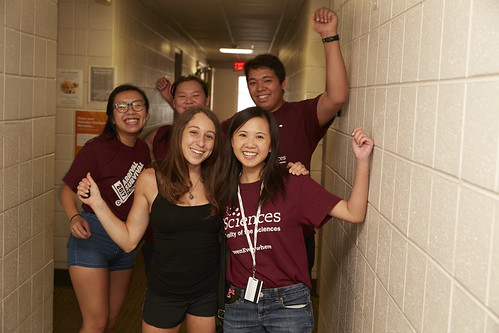