An innovator who has pushed the evolution of the pharmacy profession, Edgardo A. Mercadante P’79, returned to University of the Sciences in Philadelphia to accept an honorary doctor of science degree during the University’s 196th Founders’ Day Ceremony on Thursday, Feb. 16, 2017.

Dr. Mercadante, an Italian immigrant who moved to the U.S. in the 1950s, said it was his parents teaching to make the most of every opportunity and be able to adapt to change that help to shape his career in the ever changing industry of pharmacy.

“I am forever grateful to my parents for teaching me at an early age to make the most of what I had, and to work hard to make any situation better through persistence and perseverance. I strongly believe that entrepreneurism is founded in making the most from small opportunities while adapting to a changing environment,” said Dr. Mercadante.

“Mr. Mercadante has a career that advanced the evolution of pharmacy from a traditional dispensing role, to technology enablement and patient care innovation,” said Dr. Marvin Samson HonAlm’96, HonDSc’16, Chairman, Board of Trustees.

Most recently, Dr. Mercadante has been the CEO of MedOptions, where he grew the company to be the national leader in the delivery of behavioral health services to the long-term care industry.

In addition to his BS degree in pharmacy from Philadelphia College of Pharmacy, Dr. Mercadante has pursued advanced studies in healthcare and business management at the University of South Carolina and is a registered pharmacist in numerous states. In May 2004, USciences officially dedicated the atrium in the Athletic/Recreation Center to Dr. Mercadante as a reflection of his continuous assistance, guidance, and association with the University, as well as his leadership support to the capital campaign that year: The Campaign For USP—An Historic Opportunity to Shape Our Future.

Dr. Mercadate has been married to Colleen A. Mercadante for over 37 years. They have three children: Nicholas, Daniel, and Jessica, who is a class of 2017 PharmD candidate.

Each year, Founders’ Day at USciences recognizes its establishment on Feb. 23, 1821, as Philadelphia College of Pharmacy—the first college of pharmacy in North America, which is now a part of USciences. In addition, merit awards were presented to current undergraduate and graduate students as well as a staff and faculty member: 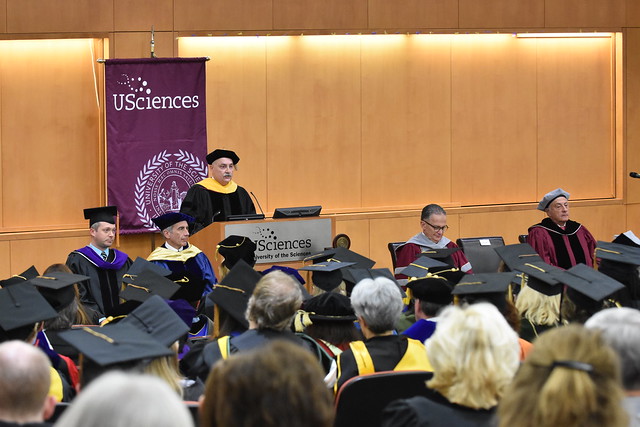